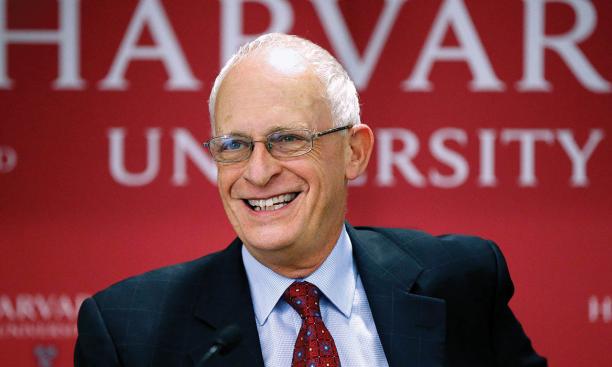 Oliver Hart *74, an economist known for his decades-long research into contracts and corporate ownership structures, was awarded the Nobel Prize for Economics on October 10th, along with MIT economist Bengt Holmström.
Hart, who was born in London and earned a Ph.D. at Princeton, has taught at Harvard since 1993. Hart and Holmström, who sometimes collaborated, “are among a handful of key contributors to studying the incentives that are created by the forms of relationships between a firm and its suppliers, employees and investors,” said Stanford University economist Roger Noll.
The Royal Swedish Academy of Sciences cited Hart’s studies of  “incomplete contracts” as one of his most important lines of inquiry. “Modern economies are held together by innumerable contracts,” the academy said in its announcement. Hart and Holmström’s “analysis of optimal contractual arrangements lays an intellectual foundation for designing policies and institutions in many areas, from bankruptcy legislation to political constitutions.”
One of Hart’s key insights was that contracts, by their nature, are “incomplete” since they cannot be written in a way that foresees every possible contingency. As a result, the allocation of power and incentives within the contract becomes critical. This can have significant consequences on whether, say, a company owns a subsidiary or chooses to contract with an outside firm.
The research of Hart and his various co-authors, said Princeton economist Wolfgang Pesendorfer, is “very influential. He and other researchers used it to understand the organizational structure of firms, financial contracts, patterns of asset ownership, andrelated issues.”
Luigi Zingales, a finance professor at the University of Chicago’s Booth School of Business, called Hart “the most intellectually honest person I know.”
“He is single-minded in the pursuit of the truth, and he is fearless in the defense of the results of his analysis,” Zingales wrote after Hart received the Nobel. “He is not afraid to go against conventional wisdom, even when he is alone. Yet, he is also ready to revise his views based on the contributions of others.”
As an example, Zingales cited Hart’s 20-year search for the intellectual foundations of incomplete contracts. After his initial explanation was challenged by two other Nobel winners, Eric Maskin and Jean Tirole, Hart, at age 60, “had the intellectual courage to admit defeat. He recognized that Maskin and Tirole’s criticisms of the intellectual foundations of his theory were correct and that he had to change them. And he did.”

Article from the Princeton Alumni Weekly